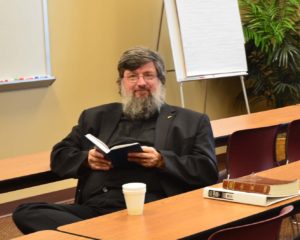 Rev. Roger Daene was grew up in Detroit, Michigan. After 35 years, his father retired from repairing cash registers and lives outside Omaha. Pastor Daene attended Lutheran grade school, high school and Concordia University in Ann Arbor, Michigan where he met and married Susan in June 1988. He attended seminary at St. Catherines, Ontario and graduated in 1995. He was first the vicar for and then served Peace Lutheran Church of the Deaf in Regina, Saskatchewan as pastor and Faith Lutheran Church in Avon, Ohio. He also earned his Master of Arts degree in History from Cleveland State University in 2005. Susan was born in Brantford, Ontario and grew up near Niagara Falls, Ontario. Her father was a private courier and her mother was an aid to homebound elderly people. She graduated from Concordia Ann Arbor with an MRS Degree.. She worked as a day care director until December 2013. Their four wonderful children are: Abigail (25), Rachel (20), Connie (16) and Benjamin (11). Abigail lives in Ann Arbor, Michigan and works as an Occupational Therapist. Rachel is in her second year of nursing at Southern Mississippi State University and is also a member of the Mississippi National Guard. She plans to make the Army her career. Connie is a sophomore and lives for marching band and community theater productions. Benjamin is in the 5th grade and loves Legos, Star Wars, and being a member of his school’s robotics team and anything that involves hunting and fishing.